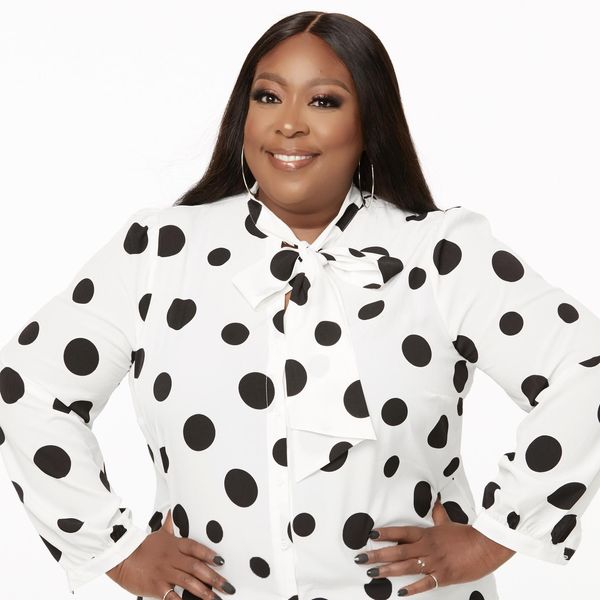 With the many dramatic events of the past year forever changing the way people live their lives, Love believes we’re at a point in history where comedians are needed more than ever before.

“When we are feeling anxious or depressed, a few light-hearted moments laughing can make a big difference,” enthused Love, one of the savvy co-hosts on “The Real.”

The medical world agrees: According to the Mayo Clinic, a good guffaw enhances your intake of oxygen-rich air; stimulates your heart, lungs and muscles; and releases endorphins in your brain.

During dark and hard times, humor has always gotten people through, Love said.

“It makes you see things differently. Plus, it’s some form of exercise, because as you’re laughing, you’re moving your stomach and your head. You are breathing differently too. It puts your mind into a different space.”

Love experienced her own challenging times growing up. In writing her memoir, “I Tried to Change So You Don’t Have To,” Love talked about finding ways to laugh through hardship.

“My life was not the best upbringing. I come from very humble beginnings — at times, a very violent past. Even with all of that, I was able to get out of the projects during the crack era, go to college, and become an entertainer.”

Love, who was once an electrical engineer, became a comedian because she aspired to make people feel good.

“I wanted to help them escape, to be a person that could help people get away from their problems just for a moment. I really do believe that laughter is the best medicine. I remember my mom repeating a saying that would always stay with me — laugh to keep from crying! And that’s exactly what I like doing with audiences.”

Love’s sense of humor has always helped her deal with the adversities in life.

“I joke about everything. I am very self-deprecating. When people say to me you don’t look your age, or you seem younger than what you are, it’s because I really do have a good sense of humor, which I have strived to develop.”

But with the pandemic affecting the world and people getting sick and dying, finding the funny in everyday life has been challenging, she acknowledged.

“I do tend to take on a lot; I was looking at the news and started worrying. As were my friends, who usually call me to get support. But I realized I couldn’t let it all get to me.”

While people have felt lonely and disconnected during the pandemic, comedians have been able to offer some comfort to audiences, noted Love.

“There was this feeling like, even though it’s sickness and illness and we’re isolated, we were really trying to find some good in it to support people. We started making fun of the fact that on Zoom calls, we weren’t wearing pants.”

She continued, “The whole country was trying to understand that life as we knew it was immensely changing. Comedians would do memes or talk about certain things discreetly — like joking how we’re all surgeons now or something like that. I think it helped a lot of people deal with their feelings.”

It was hilarious to Love when many areas ran out of toilet paper and were on the lookout for it. “Who would ever have thought that real life could be so funny?” she asked.

The Black Lives Matter movement was another intense event that happened last year. Though there were riots and police brutality — profound strain for people of color — Love felt these marches also illustrated such a joyful quality.

“It was wonderful to see people of all races coming together for community — that greatly encouraged me. I wanted to be as positive as I could during that time. I strived to be more hopeful and inspiring with my comedy, because without hope, I don’t think we could have gotten through everything that was happening,” she said.

Love tried to be more observational with her jokes, looking at the events that were happening with an uplifting, lighter touch.

“Like when the two new COVID vaccines came out, for Moderna and Pfizer. Dr. Kizzmekia Corbett, who is a Black woman, worked on the Moderna vaccine. And I joked that hers was the one I was going to take, because Kizzmekia created it! In this way, I was paying honor to a Black woman.”

Reflecting over the last 12 months, Love thought about the intense political stress felt by both Democrats and Republicans.

“In the past four years, sometimes I had to turn the television off. It became too much. I had to take a break; there was way too much negativity,” she said.

“With the former president, his hair, many of his tweets, his tan — comedians were like, ‘This may be bad, but we’ve got to find something to laugh at.’ Both political parties, too. There was always something funny going on. We leaned on comics like Dave Chappelle, Patton Oswalt, Chelsea Handler, to come up with crazy funny things.”

Ultimately, it’s about finding the laughter within ourselves, not taking life so seriously, and escaping for short periods, Love emphasized.

“You really have to find your internal inspiration, especially when you are dealing with such dark circumstances. There is so much anxiety right now. Many people are not working, they are dealing with contagious disease — it’s a lot.”

She added, “That is why I encourage people to read a book, look at a funny movie, talk to one of your comedic friends. Watch a half-hour sitcom. Do something that takes your mind away from reality for a short period of time. Escapism is really, really important.”

Even on her daytime talk show, “The Real,” Love and the other co-hosts (Garcelle Beauvais, Jeannie Mai and Adrienne Houghton) make sure to talk about topics like relationships and family.

“We want to allow the viewer to be able to escape. If they want the news, they can turn that on. But with everything so dark, we try to take our audiences in another direction so they can relax, even if it’s just for an hour. In this way, we let them know that we will get through this and reassure them that life will be okay.”

Black and Hispanic women ages 65-74 years old hospitalized with stroke had more severe strokes than their white counterparts, according to preliminary research to be

Researchers highlight the need to improve diagnosis, treatment of iron deficiency in women

A new article has highlighted the need to improve diagnosis and treatment of one of the most common conditions affecting women worldwide – iron deficiency.

I was trapped in an abusive relationship. The rule of law didn’t help me one bit.

In 2013 I was in an abusive relationship. After months and months of gaslighting, isolation aggression and infidelity, I sat shaking on my couch with

By comparing vaccination rates in 580 counties across the United States with the corresponding coronavirus disease (COVID-19) incidence rates, a recent study currently available on